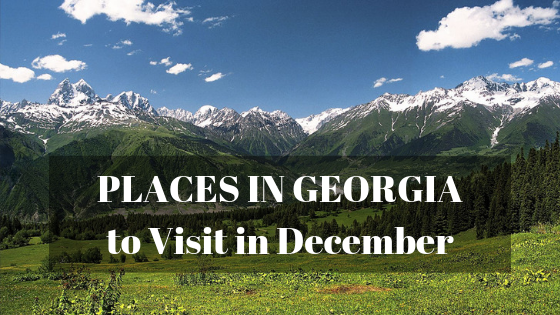 Georgia is one of those rare places that has been blessed with exquisitely beautiful natural resources.

It is located on the crossroads of Asia and Europe and experiences 12 different kinds of microclimate zones. There are snow-covered peaks, deserts, beaches of the Black Sea Coast, green mountains and thickly forested national parks. In the winter season, the place becomes a magical wonderland with snow all around. There are many places in Georgia that offer different kinds of winter tourism activities.

If you are planning to visit Georgia in winters, then read the following post to know more about the best places to visit in Georgia in December.

Before starting with the post, a quick tip -  Keep your tools ready for the early winters. There are many parts of Georgia that are cut-off from the mainland owing to heavy snow and extreme weather conditions.

The tourists usually stay at the winter resorts that open with the onset of the winter season. There are many places for skiing and other winter tourist activities, such as Gudauri, Tetnuldi, Bakuriani, Goderdzi and
Mestia-Hatsvali. These are undoubtedly the best places to visit in Georgia in December.

Places to visit in Georgia in Winter:
#1 – Martkopi Monastery:
The Martkopi Monastery is located near Tbilisi and was founded by Father Anton of Martkopi. He is one of the 13 Assyrian fathers of the 6th Century. The monastery is located in the Gardabani municipality on the forest-covered hill slopes of Mount Ialno. Surrounded by breathtaking natural beauty, it transforms into a magical wonderland every winter.
It was functional till 1934 and was abolished by the communists later. From 1950 to 1960, it was being used as a shelter for homeless children. Finally, it was converted into an aviation plant resting house. The monastery life was restored in 1989. The tomb of Saint Anton of Martkopi is the most sacred part of the monastery, which is perfectly preserved. It attains ethereal beauty with the onset of the winter season with snow all around and is one of the best places to visit in Georgia in December. A trip to Tbilisi, Georgia will help you explore many more attractions other than Martkopi Monastery.
#2 – Juta:
Juta is a small village located in the scenic Kazbegi region. It is one of the most visited places in Georgia and experiences significant tourist traffic throughout the year. The village gets surrounded by snow-covered mountains in the winter season and seems straight out of the set from the movie ‘Frozen’. It is covered with snow for six months in a year and gives the feel of Swiss Alpine region. There is a small lake in the foot of the mountains and the village is the starting point of an amazing hiking route to Mount Chaukhi. The hiking track offers stunning views which keep on getting better as we reach the top of the mountain. Zeta Camping is another popular camping spot on the way that offers a resting area and traditional local cuisine of Georgia. This is one of the best places for adventure enthusiasts who come to Georgia for the professional climbing experience. It is one of the best places to visit in Georgia in December because the winter has just started and the scenery is just amazing. 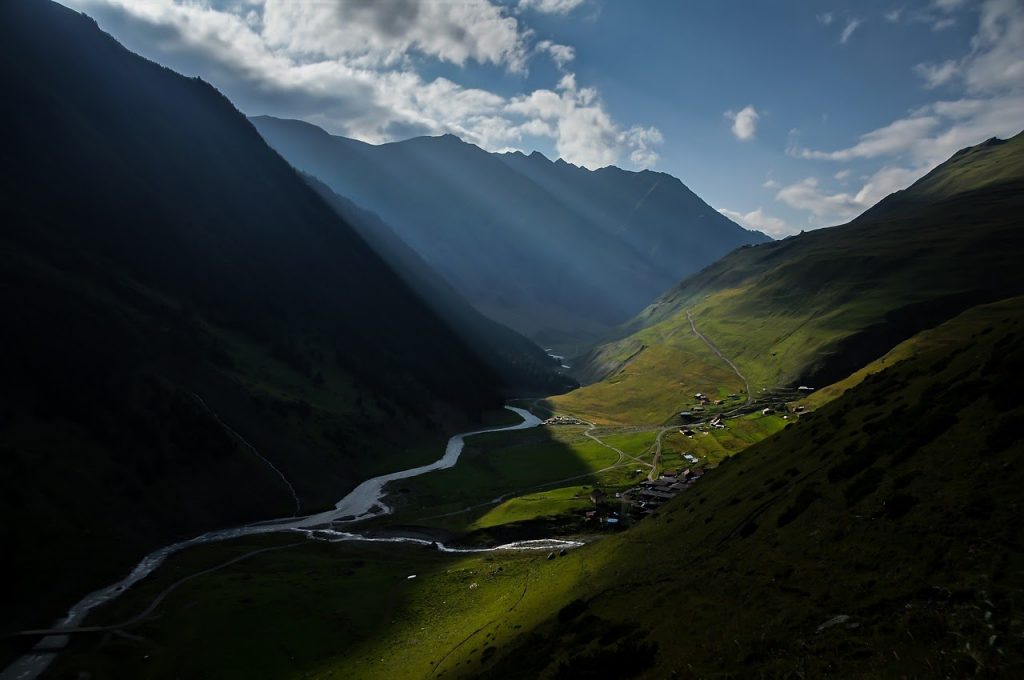 #3 – Khulo:
The Adjara region of Western Georgia is one of the best places to visit in Georgia during Winter. It has a beautiful mountain ski resort at Goderdzi and an absolutely magnificent winter wonderland called Khulo. It is located at a height of 923 m above sea level and is home to various medieval historical constructions such as Khikhani Fortress and the Monastery of Skhalta Cathedral. The Beshumi Resort, Green Lake and the Goderdzi Pass are the other important tourist hotspots. Cable cars are the daily means of transport from Khulo to Tago village.
#4 – Shaori Reservoir or Shaori Lake:
Shaori Reservoir, a place where nature is untouched by humans, is located in the Racha-Lechkhumi and Kvemo areas in Ambrolauri is one of the top places in Georgia to visit during winter. The surrounding landscape becomes magical in the winter season and is considered as one of the most distinguished natural beauties of Georgia.  It is also famous as one of the most Instagrammed locations of Georgia. Every year, it is visited by millions of tourists who just can't stop themselves from clicking numerous shots here. The lake freezes in the winter and the plateaus of the region transform into the magical abode of snow goddess. Try to make the visit in the early time of the winter to avoid getting stuck here for the rest of the season.

#5 – Mestia:
Svaneti is one of the unaltered, original places of beauty in Georgia that still retains its centuries-old customs and traditions. Mestia, located in the Svaneti region is an integral part of a tourist’s itinerary and one of the most important tourist destinations of this region. It becomes a beautiful and charming destination in the winters. This is arguably the best of all the places to visit in Georgia in December.
Even though the region has a lot of medieval monuments, it is actually a small town with very less population. It is, however, the main service centre for the Svaneti region and has all the basic modern infrastructure. Mestia has 10 rustic villages which still house the famous Svan Towers. With breathtakingly beautiful, snow-covered landscapes with churches, medieval monuments, and age-old constructions, it is a UNESCO recognised World Heritage Site.
#6 – Tusheti:
Tusheti is the protected region of Georgia that is visited by tourists all around the year. The highlands of Tusheti house some of the most exotic and rare species of the Georgian flora and fauna. It is one of the gems of northeastern Georgia. It is just like a movie scene or scenery from your dreams, in fact, a more beautiful rendition of all those combined. It is covered with snow for 5 to 6 months in a year.
There are 10 villages under Tusheti of which the Omalo Village is the centre of all activities.
Well, which ones are you planning to visit this December?? If you have already made your mind, make sure to choose the best tour packages from USA, India, UK, UAE or any other countries- that would help you enjoy your tour to its fullest even on a shoe-string. Take care!

Tony John from IndiaTravelBlog.com - an Indian travel website by a group of travel enthusiasts to share their travel experiences, with the goal of providing unbiased and first-hand information about the travel destinations and accommodation in various tourist destinations.

Got to know about the web address from Navin. I was planning to travel Kerala since last winters. However kept delaying. This information makes me Guide. Thanks for the brilliant effort on this for travel planners. Will take a print and carry.

Very informative article, it has all you need to know.And what I really liked is Tips section after each attraction, very useful.

Great blog for someone to read while travelling! Enjoyed the read

Subsribe to my newsletter

Get travel tips and updates directly in your Inbox